What Are Exoskeletons and Where Are They Used?6 min read 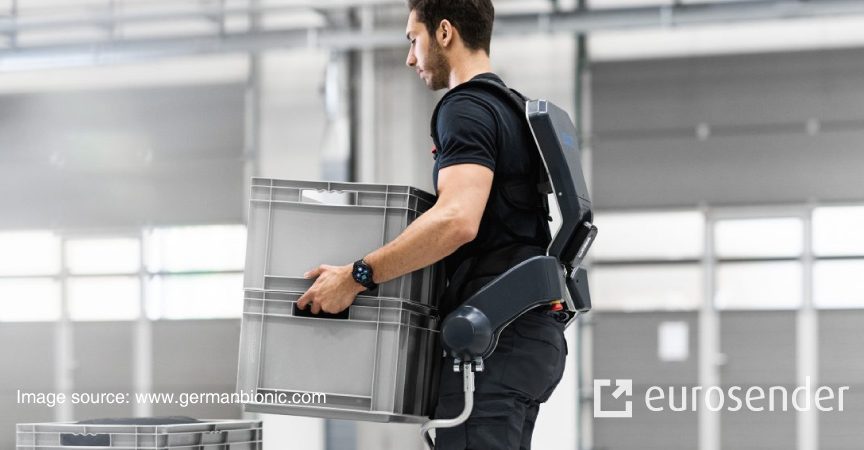 For the past 60 years, exoskeletons have been the subject of technological research and development. Despite some obvious obstacles related in particular to the heaviness of such equipment, they have become more and more widespread in different industry fields. Let’s see what exoskeletons are, what types of exoskeletons exist, what is their role, how they are used in the industry (in logistics notably) and what are the pros and cons of using them.

What is an exoskeleton and where is it used?

Originally, an exoskeleton (as opposed to endoskeleton) is a skeleton that does not belong to one’s body but is attached to it. In common language, it is sometimes called “a shell”. The word “exoskeleton” has been primarily related to animals (in particular to insects and crustaceans), but recently it has been more and more used in regard to human beings.

When related to mankind, exoskeletons are robotic devices worn by humans and intended to help them in different fields of activity:

Exoskeletons consist of fixed and removable parts that can imitate human arms and legs.

When were the first exoskeletons created?

The general history of human beings’ exoskeletons began quite a long ago. The prototypes of such devices were the protective armors of knights during the Middle Ages. The history of such devices in their modern sense begins in the 1960s when the American company General Electric tried to develop the first exoskeleton called Hardiman. This unit weighed about 680 kg and was supposed to be able to lift objects up to the same weight. Due to its slowness, limited functionality and big weight, the project was not further developed, but it set the stage for designing such devices.

What are the types of exoskeletons?

Exoskeletons can be classified into two categories: active (or powered) and passive exoskeletons.

An active exoskeleton is equipped with one or more electric motors and other electric details that actively move the body (legs, arms, and torso) by using a computer. Their main goal is to considerably increase (tenfold, for example) the strength of those wearing them. A real challenge, because such a device must contain multiple motors, articulations, sources of energy and other electronic details and, at the same time, it should be as light as possible to be worn comfortably. These devices generally weigh between 15 and 20 kg. Some models that are now used in military and civil security domains may weigh up to 150 kg.

Despite the progress being made, manufacturers are still far from being able to offer an integral mechanism of an active exoskeleton to be used in different industrial fields. An exoskeleton that we could put on and with which we could do everything would indeed require too many motors and energy. It would weigh too much and would be quite hard to pilot. Hence a recourse to devices limited to assisting only particular parts of the body (be it arms, legs, back or torso) and dedicated to very specific tasks (lifting/moving very heavy objects in places with little space for large machines).

A passive exoskeleton does not have an external source of energy but uses mechanical components such as springs and shock absorbers, which store the energy of current movements and then release them during further movements of a person wearing such equipment.

Passive exoskeletons are quite light and weigh 3kg – 5kg approximately. Their primary function is to help a human being to carry out a movement. 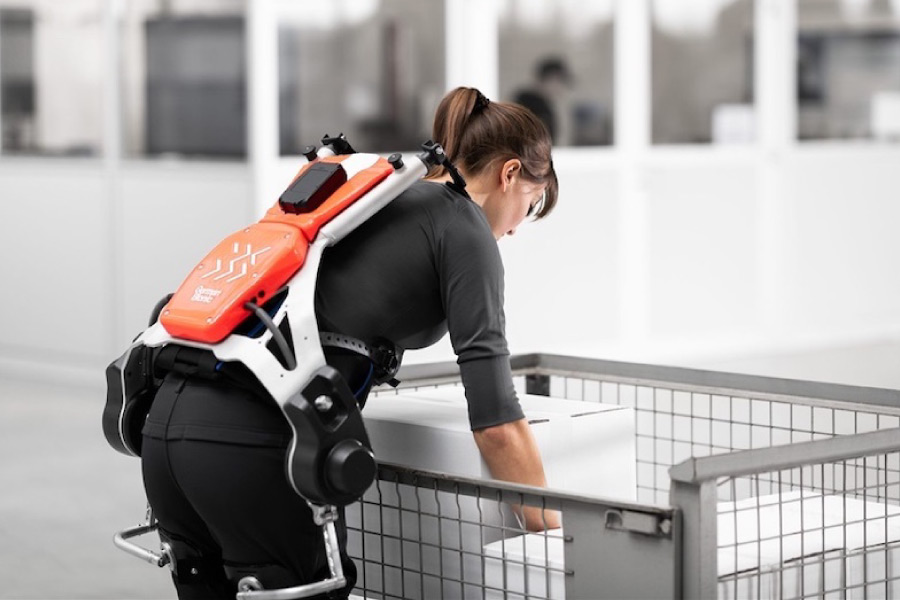 How are exoskeletons used in logistics?

Some logistics companies, such as DB Schenker and DHL in Germany or Geodis in the Netherlands, use exoskeletons to facilitate the work of their warehouse workers who reproduce the same movement every day and carry heavy loads frequently.

In the logistics industry, exoskeletons are intended to make the lifting and carrying of packages weighing 15 – 30 kg easier or almost effortless. These devices are especially useful for workers who lift in total more than 3.5 – 4 tons during the day.

This being said, we should not forget that as it is with almost every new phenomenon, there is a reverse side to such devices as exoskeletons. So, let’s see what are the advantages and disadvantages of using exoskeletons in logistics.

What are the advantages and disadvantages of using exoskeletons in warehouses?

Exoskeletons, thanks to the maintenance and amplification of the user’s strength, reduce cases of injury, increase safety as well as decrease fatigue, arduousness and facilitate the work for employees. As an example, for workers whose work involves lifting weights, as well as frequent flexion and extension of the back during the day, an exoskeleton reduces the general load on the back by 40%. This allows a reduction in professional medical risks and an increase in the possible working time for employees performing exhausting and repetitive duties.

Sometimes the weight of an exoskeleton is quite heavy for the worker, which may cause him/her to feel uncomfortable at work. If not used properly and in line with specific instructions, exoskeletons may induce some problems with muscular tension and cause some forms of musculoskeletal disorders.

As for mechanical risks, technical failure or improper adjustment of an exoskeleton can cause collisions and injuries to an employee wearing it. If an exoskeleton is not worn properly, prolonged friction with certain areas of the skin can generate irritation. Mechanical risks must therefore also be considered when choosing whether to use or not an exoskeleton. It is worth noting though that if addressed properly, the majority of the risks of using exoskeletons at work can be substantially mitigated or even eliminated. In any case, all the pros and cons of using exoskeletons shall always be preliminarily weighed by particular companies and their employees.

To conclude we could say that even in highly automated warehouses, employees are essential for many activities, such as taking loads out of their packaging, for example. Even though most lifting operations are carried out by machines such as forklifts or robots, such specific operations are sometimes too complex to automate them. Here, an exoskeleton’s power of the machine and human competence can be harmonically combined, providing the perfect solution.

We at Eurosender understand how important it is to be informed of the significant issues and of the latest trends in the world of logistics, that’s why we prepared this article for you. We are an innovative logistics platform that can offer you fast, professional and affordable transport services. Do not hesitate to discover our offers and to contact us, we are always open for cooperation and we will be glad to assist you!

About the Author / Roman Bilozor

Hello! My name is Roman and I am from Ukraine. For me reading and writing are among the most interesting activities in life. That's why I'm fond of my work at Eurosender, where we try to create the best content for you!;)