After one month of intense matches and hours spent gazing at  the computer or TV screen, EURO 2016 has come to an end. You’ve probably read a lot of articles in the media about all the matches and all the events organized on this ocassion. But we bet you didn’t know that there is a close connection between Eurosender and EURO 2016. And no,  it’s not only the similarity of the name.

Here are 11 facts that you should know about:

1. Fans pack the streets in Lisbon to celebrate their team’s victory while waiting for the cup to be delivered through Eurosender. This was one of the most important orders we’ve received so far. Our couriers wear gloves when handling this honourable package.

2. You maybe don’t know that the French president has created a special committee to provide additional support. Among experts from various field such as development, digital technology, culture, youth, he included logistics experts and asked for Eurosender’s advice on the matter. Since French have prepared so many souvenirs for the supporters, they had to make sure people can ship them to their homes. How you can carry Super Victor mascot around with you? Some men have a prestige to maintain. So we help them ship it directly home.

3. After so many packages sent through Eurosender from France to every corner of Europe, the entire Eurosender team speaks French now. Do you know all those videos of English people faking French accent? This is how our offices sound like now. Plus, French people learnt English too. That’s an improvement.

4. Since the party moved to Portugal, our prediction is that every team member at Eurosender will fluently speak Portuguese in the next month. Let all those souvenirs bought in Portugal be shipped all around Europe.

5. You already heard that French team had prepared the bus for celebration. Now that they didn’t win, we will help them pack everything and prepare for shipping all the promotional items that they have prepared for celebration. We are nice enough, we know.

6. The Euro song by David Guetta was initially created for Eurosender. We have high standards and we didn’t really like it, but for EURO 2016 we think it was good enough.

7. The slogan they use, “Le rendez-vous” goes hand in hand with one of ours: “Simple, quick, reliable”. This time they did a good job. We like it, guys. 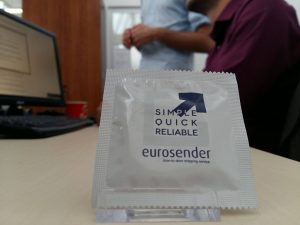 8. Gibraltar, the British overseas territory on the south coast of Spain entered qualifications for the very first time. It was the second biggest party after Eurosender announced some time ago that we may expand our services there too.

9. Many high profile people wanted to meet our management team to get to know how we do this great job and expand so fast on other markets. They invited us to the opening of the championship. Veni, vidi, vici.

10. One by one, people from different countries of EU packed up their things, shipped them through Eurosender and went home. Being on the last mile, France felt left aside. They also want to pack up after losing EURO 2016, but the problem is that they don’t have where to go. No worries, through Eurosender, courier services can be booked to all cities in France and within the same city. France, we feel your pain, you will get our services too, even in the same neighbourhood.

11. At Eurosender, we have built an international team from all corners of the world. After this championship, some of our European colleagues don’t talk to each other anymore. We think about closing the business. Just kidding. We’ll keep on rolling and shaking things up even more.

*This article is a pamphlet and it should be treated as such. Written with the contribution of Alessandro Tedesco.

About the Author / Gabriela Buzoianu

Gabriela joins the team's effort to build the most comprehensive platform with information about the logistics industry. We aim to provide high-quality content that can be useful for both B2B and C2C segments.