The hidden importance of postcodes

When we send a mail or a package, we simply write the recipient’s address and most probably all information we provide seems so logical that we even don’t ask ourselves why is each of them so important. It seems normal that each house has its street number and each city its postcode or that we provide the name of the country when we send something abroad. But what can happen if we put a wrong postcode or don’t provide the street number? Will the postman still deliver our mail?

When were the postcodes introduced?

Postcodes were first introduced in large cities as the population started increasing back around 1860. Its aim was to alleviate the complexity of postal delivery. By World War I, most large European cities had postal districts or zone numbers. Around 1930 smaller towns and even countryside areas started getting divided into these postal districts or zone numbering. From here on, the postcode system evolved.

Modern postcodes as we know today were first used in the Ukrainian Soviet Socialist Republic in 1932. They were followed by Germany in 1941, Singapore in 1950, Argentina in 1958, the US in 1963 and so on.

Why are postcodes so important?

No matter what you ship, you have to provide the exact address for delivery in order to avoid any late or misdelivery. All addresses are machine sorted which means that the correct postcode will enable the machine to correctly place your parcel for delivery. If you put a wrong postcode, it will we automatically sorted for another district or city. As the national posts and various courier service providers deliver millions of pieces per day the correct postcode is really essential.

What happens if you put a wrong postcode?

Some countries use postcodes consisting only of digits while others use digits and letters, sometimes including spaces or punctuation. Therefore, it is very important that you know the exact postcode and how it is written. It means that you have to check if there are any spaces, hyphens, … as each mistake can only cause issues.

When you place an order online for a courier company to deliver, the system may accept your order with the wrong postcode, but it will be rejected later on in the system as it will be unidentifiable. This will cause a delay in the selected pickup date as you will first have to provide the correct delivery address to a customer support agent who will have to place your order one more time. Some online systems can suggest correct postcodes or they can inform you that your postcode is incorrect or invalid.

But if you send a mail by post throwing it into a mailbox, where nobody checks if the address is correct, this mail can be delivered if you get lucky, but most probably such mails get misdelivered or not delivered at all. It is wise to write your address on the back side or left top on the front side. This way you stand a better chance to get your mail back if there is any issue with the delivery address.

Will I pay the same amount if I ship a parcel using standard service or freight service using Eurosender’s platform?

No. Definitely no. If you ship a parcel by standard service, the price will not change no matter which postcodes you use for collection and delivery countries. But if you use freight service, prices will change accordingly to postcodes that you use as the pic-up and delivery address. Freight service is up standard service, used primarily for heavier and larger shippings, where prices depend on each shipment separately.

Eircode in Ireland was introduced in July 2015 as national postcode system with the aim to enable individuals and business to send mails, packages, goods, … to each address in the country. More than 35% of addresses in Ireland share their address with at least one other property. Now, with Eircode every single household has its own seven-digit code in Ireland.

An Eircode is made up of two parts. The first part is so-called a Routing Key consisting of three characters defining a principal post town. The second part is called Unique Identifier consisting of four characters which are unique to each address. 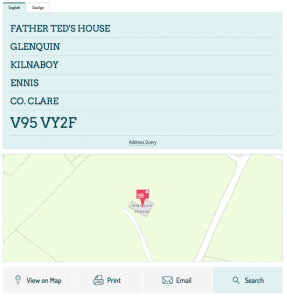 Postcodes and CEDEX system in France

Postcodes in France consist of five digits. The first two digits represent the department in which the city or town is located and the remaining three digits represent a more detailed location. 000 is reserved for a prefecture (either chef-lieu de département, chef-lieu de région or the jurisdiction of a préfecture). The exception are Paris, Lyon and Marseille where the last two digits identify the arrondissement.

There also exist CEDEX system in France – Courrier d’Entreprise à Distribution EXceptionnelle (“business mail with special delivery”) offered by French post La Poste. It is used by those who receive large volumes of mail; mainly business users, but also large organizations, associations, NGOs, … A postcode is reserved for each recipient or a post office box holder where the last three digits are unique. CEDEX has to be written in capitals.

Ana Britovsek Kunsek
Ana is one of those Eurosender employees who loves travelling to bits. She loves sharing her travel experiences through Eurosender's blog. She usually writes content in English, French and Slovenian. She is also leading a team in the Marketing department.
See more articles from Ana Britovsek Kunsek
TrustScore 4 | 16979 reviews
Recommended articles
Shipping Guide
How Do Standard Courier Services Work?

Mariana Franco
26 days ago
Erasmus Student Guide
Is Erasmus Worth It?