Two days ago we briefly told the story of two refugees camps in Greece and the people who sent them packages, this time we shed light on two initiatives launched by two students’ organizations, Erasmus Student Network in Greece and Croatia.

We have partnered with ESN sections from different countries in order to sponsor many of their event for students. We didn’t hesitate when they turned to us to ask for help in delivering packages with warm clothes to people from Camerino, the Italian city where the earthquake caused widespread damage.

We appreciate when people put effort and make time to think and help others in need. We believe that the least we can do is to support their initiatives and engage ourselves more proactively in this for the future.

As mobility does not only consist of travelling and studying abroad, ESN has been implementing SocialErasmus since 2010: a project that involves young citizens during their mobility experience through volunteering activities that take social action and foster change in the society. Every year, more than 3000 social activities are organized by ESN volunteers all over Europe as part of the SocialErasmus project, engaging more than 20. 000 international students.

Eurosender is a promoter of student mobility and has partnered with many student organizations across Europe. We try to be of help and support most of the actions they organize, regardless if their nature.

The earthquake in central Italy on October 26th and October 30th left Camerino the most affected area in the region. Camelot, as it’s called for its magic, is a small town with just 7.000 inhabitants and a local University (UNICAM) of around 8.000 students.
The historical centre of the town was mainly affected by the earthquakes and most of the buildings are now declared uninhabitable. As a result, 3.300 people were left homeless.

The Erasmus students in Greece, alongside local students, wanted to support the people in the area by offering them necessary goods. Based on a list of basic necessities, compiled by ESN Italy, the sections of ESN Greece collected goods such as blankets, shoes, clothes and personal care products and shipped them to Italy.

“We managed to safely send the goods that were gathered by the ESN sections around Greece, thanks to our national partner, Eurosender. Their support was a key to the success of this project, as they encouraged us to keep on gathering goods without worrying about the transportation.”, says Georgia Anastasopoulou, the president of ESN Greece. 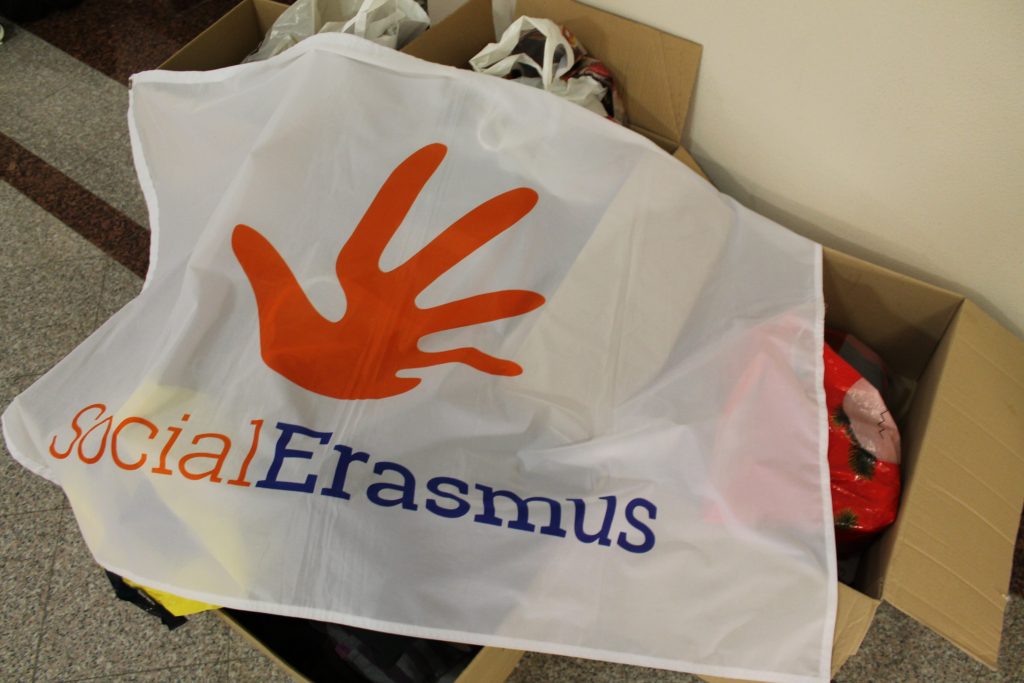 The same Erasmus Student Network, but this time from Croatia, answered the call for help launched by the Italian sections after the same earthquake which caused widespread damage and left Camerino in shock and anxiety. National platform of Erasmus Student Network Croatia, together with the SocialErasmus team organized a collection of clothes and necessities for ESN AURE Camerino, people in Camerino and surrounding neighbourhood.

“Fortunately all members of our team were extremely passionate about SocialErasmus and strongly committed to the Erasmus Student Network, which was how this cooperation achieved its success. The best thing about ESN volunteers cooperating with other ESNers is that you are never alone. Together with the help of all sections, we collected 4 boxes that we would like to send to those in need.
We hope this story can be seen as an inspiration for future cooperation among ESN sections and countries. Whenever you have an idea or need a helping hand, it’s good to know you can contact anyone in the network for further inspiration and help. Imagine how much we could achieve and how powerful our message could become if more people did the same.”, says Josipa Friščić, the SocialErasmus coordinator of ESN Croatia.

About the Author / Gabriela Buzoianu

Gabriela joins the team's effort to build the most comprehensive platform with information about the logistics industry. We aim to provide high-quality content that can be useful for both B2B and C2C segments.