Top 10 weirdest shipping requests to and from Spain

Spain is one of the top touristic destinations in the world, a land of impressive cultural heritage, sunny beaches and delicious food. With top quality products such as olive oil, renown wines, fresh vegetables and the rightfully famous jamón ibérico, is not very surprising that many foods and drink products are sent from the country overseas. Many worried Spanish parents send homegrown or homecooked meals to their children or family members abroad, convinced that you simply cannot find the right thing while living out of the country. Although olive oil and packed cured meats such as jamón or chorizo are the most popular items, there are many other remarkably weird shipments we can think of. The saga of weird shipping requests continues! 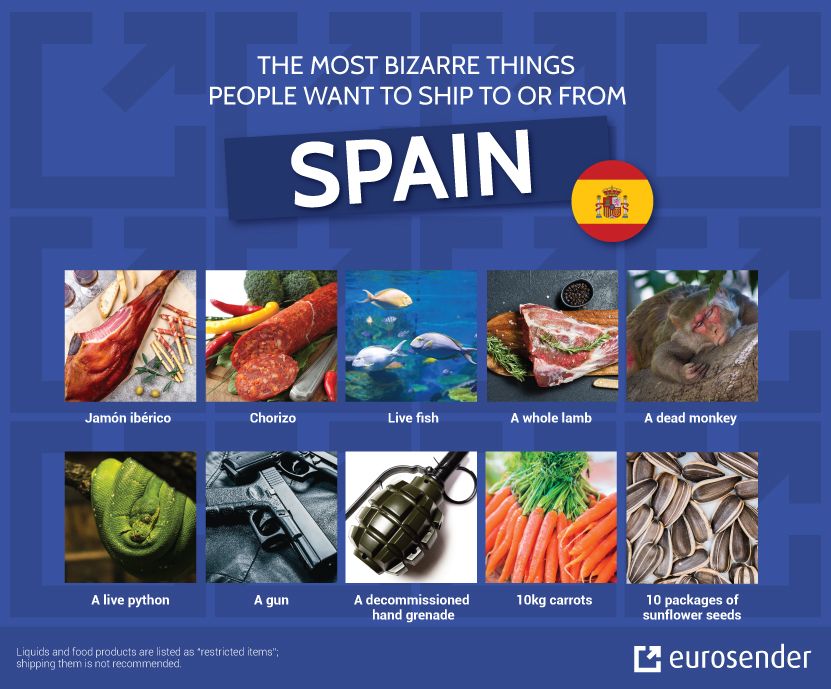 Ghastly as it is, a dead monkey was the actual cargo workers in a warehouse found when they opened a foul-smelling package that was going around the facilities. After calling the authorities, they opened the package to confirm the content was indeed animal remains and not the other terrifying possibility! After disposing of the remains and contacting the sender and receiver, they are still investigating, whether this was part of an underground animal smuggling ring or a one-time-shipping situation between two very irresponsible and ill-informed people. What warehouse workers must have seen! The shipping of animal and human remains is heavily restricted and can even be seen as a public health threat with heavy legal consequences, so be aware. (Yes, we know you won’t ship dead monkeys, but still!)

Collecting can be a hazardous activity. Especially if you collect antique weapons and other war memorabilia. This is the case of a Spanish collector who found a gem in a flea market: an American made decommissioned WWII hand grenade in a perfect condition, ready to grace the shelves of a lucky treasure hunter. The labourers at the scanning section of a post warehouse were not so thrilled, though, as they called the National Police forces when they found the grenade inside a seemingly normal package. Members of the TEDAX forces (Spanish bomb disposal forces) were called and promptly appeared in the facilities, ready to eliminate the imminent threat…when the sender and receiver made contact with the warehouse to end the frenzy. The grenade was authentic, but had long been decommissioned and presented no harm. Both the sender and the receiver should have known better, because weapons, even antiques, are one of the most restricted items when shipping and in some cases even illegal to own!

What is the best way to ship a live python to a buyer? If you don’t have a proper tank with controlled temperature, the right environment, enough room and a shipper with experience and proper logistics capabilities, you can use a Tupperware inside a cardboard box. At least, that was the reasoning of a sender in Spain that put a poor albino ball python in a flimsy plastic container and shipped it from Zaragoza to Málaga. Imagine the surprise and horror of the post workers when they received the open package! This genius of a sender had put some wet paper towels inside the container, to keep the snake moist. However, the water leaked and soaked the box, that broke and revealed to the workers at the post office the equally sad and spooky interior. The python was quickly rescued and taken to a vet clinic, and hopefully found a home or rescue, safe and far from Tupperware containers!

If you have a weird or unusual shipping request, ask us! You can send almost anything (but no pythons, please, give messengers a break) with Eurosender, and our logistics experts will tell you if your shipment is feasible or if you will make it into our next weird shipping article!

These are our favourites from the list of weird or unusual things sent to and from Spain. Can you think of some others? Tell us in the comments below, we are always ready to have a laugh!

Mariana Franco
29 days ago
Erasmus Student Guide
Is Erasmus Worth It?