Unusual Shipping Requests to and from Ukraine

The first famous shipper of Ukraine was the Princess Olga of Kyiv who ruled in Kievan Rus in the 10th century. In 945 her husband, Prince Igor, was gruesomely murdered by the Slavic tribe of the Drevlyans for gathering tributes. According to annals, the princess then requested each household in the Drevlyan town of Iskorosten to give her a homing pigeon as a gift. She avenged the death of the loved one by tying a burning paper to the doves’ legs and sending them back home. The whole town was burned down and turned to ashes after that. That’s a hell of a shipment, right?

The parcels we’re going to tell you about are certainly less fatal but are every bit as mind-blowing. Apart from anxious family members who regularly provide their ever-hungry offspring studying abroad with all kinds of foods from sacks of potatoes to cooked varenyky (Ukrainian dumplings), Ukrainians have many weird ideas in store. 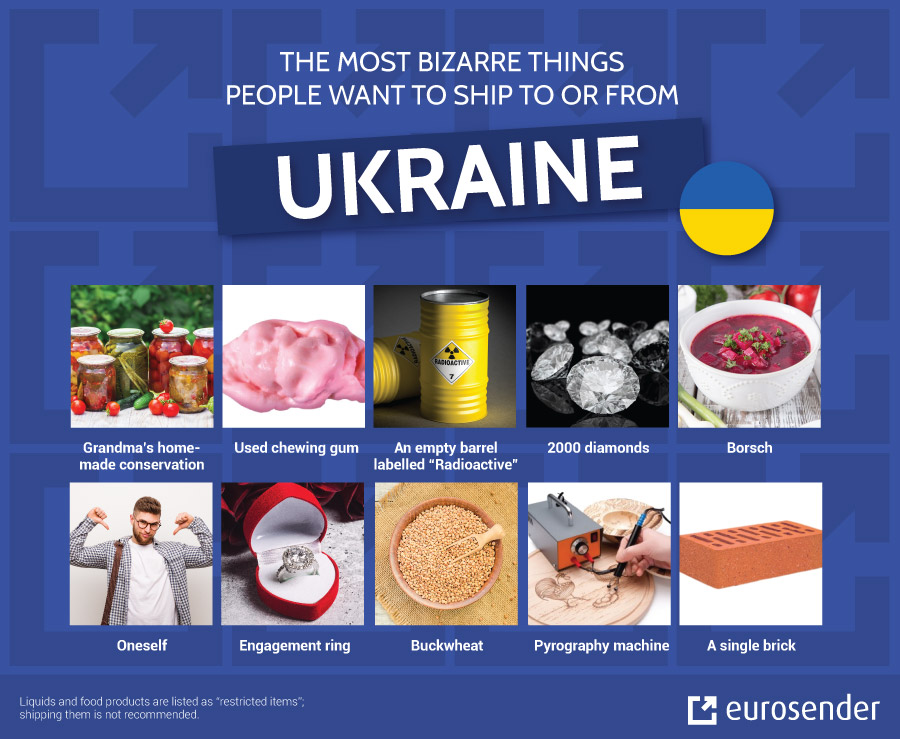 … sending each other a chewed-up gum, apparently. As gross as this may sound, varnished tale can’t be round. Dreams do come true: a girl from Ukraine was watching her favourite series and fell for a Netherlandian actor starring in it. She somehow found a way to contact him, and a touching long-distance relationship began to unfold. The high point of the couple’s closeness happened when they decided to ship used chewing gum to each other for some reason. Awww, isn’t it romantic?

Who Said, Who Said I Can’t Be a Parcel?

Here’s a story: a cunning robber from Dnipro city hid in a wooden box and asked a friend to take it to the post office. The package was addressed to Kharkiv city, and the man ended up in a truck with other shipments. During the transport, the trespasser got out of the box and opened the rest of the parcels. On the way, he managed to steal a Toshiba laptop for 200$, Apple Watch for 180$ and Xiaomi smartphone for 100$.

After that, the man climbed back into his box and waited for the car to reach its destination. But in the Kharkiv post office, he was finally found and handed over to the police. During the trial, the accused pleaded guilty in full. The court sentenced the man to three years in prison for attempted robbery and illegal breaking into a courier car. Quite a costly ride, don’t you think? There’s a happy ending too: our hero was released from serving a sentence with a probationary period of two years. Good luck to him!

Neighbours from Hell: the Brick

Two neighbours in a Ukrainian village had a typical falling out. Someone’s apple tree violated the borders of the other or one’s dog made a mess in the garden of the second, things like that, you know. But the outcome of their quarrel was far from typical.

The neighbour A decided to ship a parcel to the neighbour B as an act of vengeance, covering up his real name in the sender address. The neighbour B received a notification about a package intended for him, dutifully went to the local parcel shop and even paid the fee for the weighty shipment. Intrigued, the man opened the box and found… a single blasted brick inside. It was no mystery for him then who the sender was.

P.S.: Please don’t ship chewed gum, a single brick or yourself with Eurosender. We generally don’t accept garbage, people (dead or alive) or revenge parcels and sincerely hope for our customers’ understanding and sanity.

*Please be aware that if you decide to ship items listed as forbidden, you will be responsible for any damages or expenses incurred.

Did your jaw drop at one of those weird shipping requests from Ukraine? Did you have a good laugh with us? We certainly hope so. Eurosender has so much more to share with you, check out our blog category for more funny logistics, and make sure to contact our customer support team should any questions arise. We’ll also be happy to provide you with the favourable shipping services, so don’t hesitate and place your order now.