Unusual shipping requests to and from Greece

Greece is known for its authentic virgin olive oil, called “liquid gold” by many, and for other fine agricultural products. Therefore, it comes as no surprise that people ship bottles of olive oil and Greek wine to and from Greece on a regular basis. The consignees usually include Greek producers who ship their products abroad, Greek parents who want to send food and other necessities to their children abroad, and tourists from all over the world who send souvenirs to their friends and family. However, there are times in which the courier companies are surprised with the items that Greeks and tourists that visit Greece have included in their packages or have requested to include in their packages. Some of the items even made international headlines. Eurosender’s bizarre shipping requests series continues… 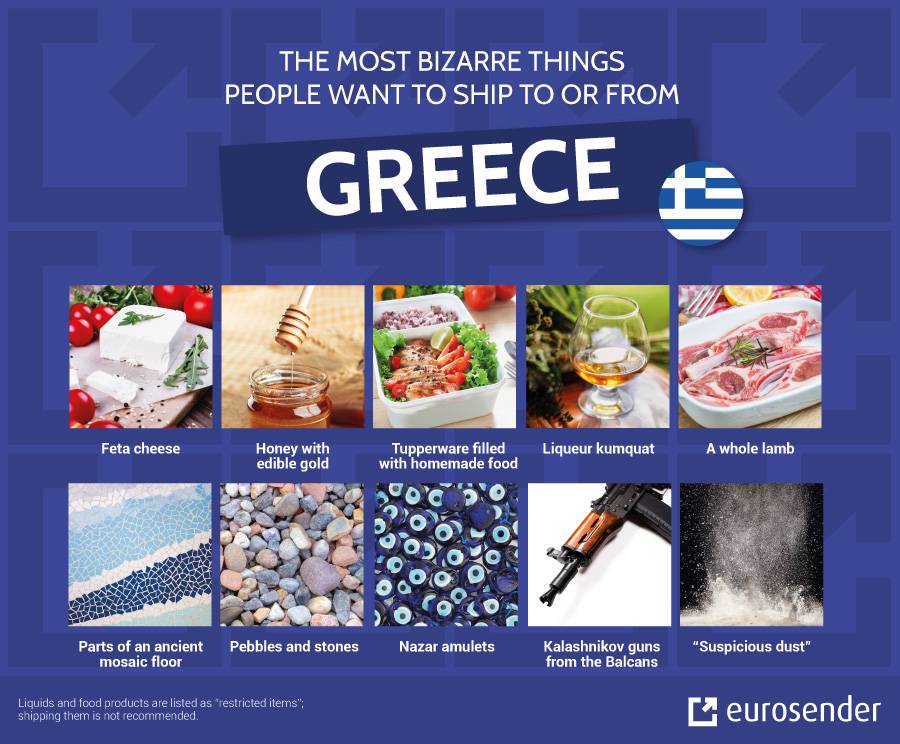 Despite the popular belief, lamb is not a big part of the average Greek diet. It is rarely used in our favourite street food “souvlaki” or “gyros”, although it is often displayed in the menus of many Greek restaurants abroad. However, there is one occasion in which eating lamb is required by tradition. Every Easter Sunday, Greeks are celebrating by eating and drinking outdoors and grilling a whole lamb (often with its head, legs and other unnecessary parts) that is supposed to feed the entire family and the rest of the guests.

The tradition is not always preserved in the big cities like Athens, where buying a whole grass-fed lamb is a hard task and finding an open space to grill is often impossible. However, many Athenians are often surprised by their family members from the countryside with a small lamb for the Easter Sunday celebrations. Although courier companies reject the requests for shipping 10+ kg of fresh meat, many villagers find a way to make their gift reach their Athenian family members on time. They often send the meat with the help of bus and truck drivers that pass by their area. Although fresh meat is not allowed to be sent via courier, you can send Tupperware with cooked food and packaged food items. Learn here how to do this correctly.

In 2018, a German woman sent three different parts of an ancient mosaic floor to Greece via post. According to the Greek Ministry of Culture and Ancient Relics, the first two parts of the mosaic floor were stolen from an ancient private residence in Delos island and the third one was taken from Hadrian’s Library in Athens. Although there is still a mystery regarding who took the ancient relics, how they were found in Germany and who was the woman who sent them back, we know that the mosaic floor parts returned were they belonged safely. It is worth mentioning that this is not the first-time ancient relics are stolen and transported illegally outside of Greece. However, it is unusual to see them returning via post.

On January 2019, a “bizarre” package from India caused panic in the warehouses of the Hellenic Post in Piraeus. The package, that was going to be sent to the University of Piraeus, contained a speck of mysterious dust that was non-identifiable. Serious concerns regarding the public health were raised and a special police unit came to take samples of the dust and safely dispose of the package. At the same time, 29 “suspicious” envelopes were found to be sent from India to the Deans of different Universities in Greece. Most of them ended up being harmless, however, one of them, that was sent to the University in Mytilini, contained a substance that caused mild irritation to five people that came in physical touch with it and who ended up in the hospital. Although they are currently in good condition, all Universities’ correspondence is now thoroughly checked before reaching their recipients.

*Please be aware that if you decide to ship items listed as forbidden, you will be responsible for any damages or expenses incurred.

Now, you know what are some of the weirdest shipping habits Greeks have. We hope you had a good laugh and you learned that some items are not meant for shipping. We will be doing more of these so stay tuned!

And you? What are the weirdest things you have heard someone was shipping or trying to ship? Which country or region should we write about next time? Tell us in the comments below and maybe we will feature your answer in our next blog post!

Marialena Perpiraki
Marialena is a content creator and team lead at Eurosender. Her goal is to help customers understand logistics, by creating content in Greek and English that is informative, accurate and easy to understand.
See more articles from Marialena Perpiraki
TrustScore 4 | 17188 reviews
Recommended articles
Shipping Guide
How Do Standard Courier Services Work?

Mariana Franco
29 days ago
Erasmus Student Guide
Is Erasmus Worth It?