Weird shipping requests from and to Belgium4 min read 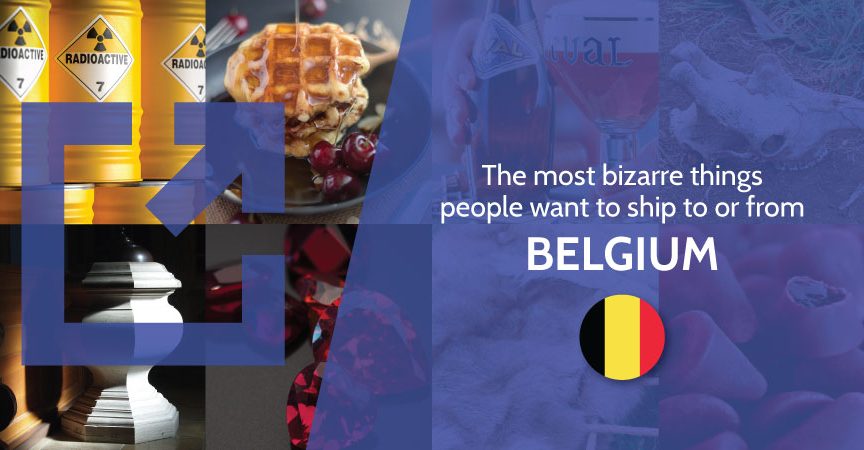 Funny shipping habits • How to Ship

Belgium, the country known for many things. From Bruges canals, delicious chocolates and waffles to the medieval castles and Trappist beers. You will find something for everyone to do, to see and to eat. Therefore, you would not easily call Belgium a boring country. This does not only apply to its highlights and cuisines but as we have noticed, also to its shipments. Every day shipments enter and leave the country, some even weirder than the other. For this reason, we have collected some of the weirdest things we could find in the continuation of our bizarre shipment series. So, go get yourself a Belgian waffle and settle in for the weirdest things that people wanted to ship to or from Belgium. 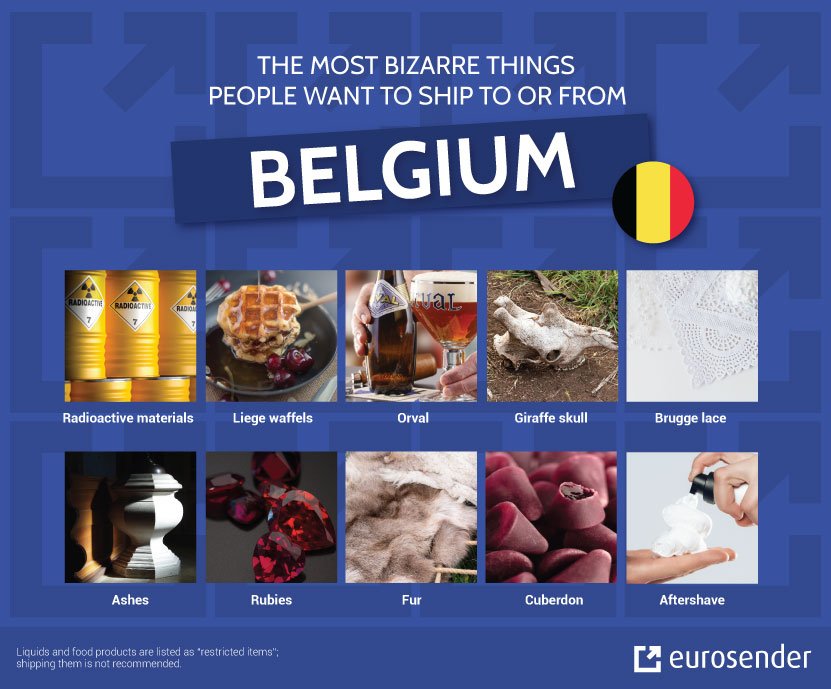 Believe it or not, but sending actual remnants of animals is something that happens more often than you would expect. A few weeks back, we got a request to send a giraffe skull from France to Belgium. You could imagine our surprise when we heard what the content of that shipment was going to be. Sending such a fragile and delicate item as a skull is most definitely not something we recommend.

In addition to that, sending human ashes is an unusual order that requires a certain seriousness. Although it is indeed possible to send ashes across the border, this is not part of Eurosender’s policy. As with animal remains, the remains of the deceased are included in the list of prohibited items for transport. However, do not worry. Eurosender has devoted an article specifically dedicated to this delicate matter. It discusses possible alternatives and also mentions the names of companies specializing in these types of shipments. For those who are interested in, some companies even give the opportunity to send human ashes into space!

When you are aware that the price of a ruby can reach more than a million dollars per carat, sending precious stones like these are above all a matter of trust. To send this kind of gift to someone you love is to put yourself in the same situation as Frodo who is ready to throw Sauron’s ring into the mountain of fate. It is about facing a terrible dilemma.

The sending of precious objects, in Belgium or elsewhere, deserves to be treated carefully. Eurosender does not recommend the transport of precious stones. If you still want to place an order of this type, you should know that the insurance will not be valid in case of damage or loss of the package.

We strongly recommend that you take a look at how to pack expensive belongings abroad as well. Perhaps it gives a bit more serenity knowing that your gemstone worth over 100k+ is going through unfamiliar hands, but you know, at least properly packaged.

If you have ever tried some fresh, warm Belgian waffles, we are sure you will understand why people tried to send this national delicacy across the borders. There are only so many things that beat a hot waffle with chocolate. However, food items such as waffles are not recommended to be shipped via courier services, among other things. Many food products are unsuitable for transport due to special transport conditions. Waffles are also best eaten on the same day; however, transit can take up to 30 hours. And nobody is a fan of stale waffles, right?

Now you read about some of the weirdest shipping habits Belgians have. We hope you enjoyed it and also learned that some items are not meant for shipping or need special treatment.

Get in touch with us!

What about you and your friends? What are the weirdest things you have heard about someone was trying to ship? Tell us in the comments below!

About the Author / Eszra Brouwer

Eszra is an intern from the Netherlands. She enjoys working in such an international team as Eurosender has and creating content for everyone who is interested. Along with that, she has made it a true sport to go on Erasmus as many times as she possibly can.